The time has come.

After years of character building and countless superhero battles, April 26th will bring fans together to marvel at a true spectacle: Avengers Endgame.

Endgame is a true culmination of the 21 films that have preceded it, the final chapter of the saga that’s set to break box office history.

The Marvel Cinematic Universe is a pure force of nature (even if it is comprised of mostly CGI). Since 2008, Marvel has gathered a colossal and dedicated fanbase that stretches right across the world.

Avengers Infinity War took everyone on an emotional roller coaster, the follow up to that film looks to do exactly the same but on an even bigger scale.

The ending of Infinity War left audiences shell shocked. A true cliffhanger has had millions of people speculating, theorising and predicting how the next instalment is going to follow it.

While this built a huge amount of hype, and saw Infinity War make a whopping $2 billion, there were certain fans who thought the trailers showed too much.

Studios will aim to sell tickets by showing epic set pieces in marketing materials but in doing so, it spoils the natural surprise fans would have got if they hadn’t been exposed to it.

This is where Marvel has excelled with Avengers: Endgame marketing. Here’s our breakdown of how Marvel has used different platforms and strategies to build even more hype around the film.

So far, there has been around three trailers released for Endgame. However, pretty much all the trailers have only shown the first 20 minutes of the film.

This is a smart move for many reasons. Not only does it protect fans from spoilers, it also leaves audiences eager to buy tickets to the film out of sheer curiosity. 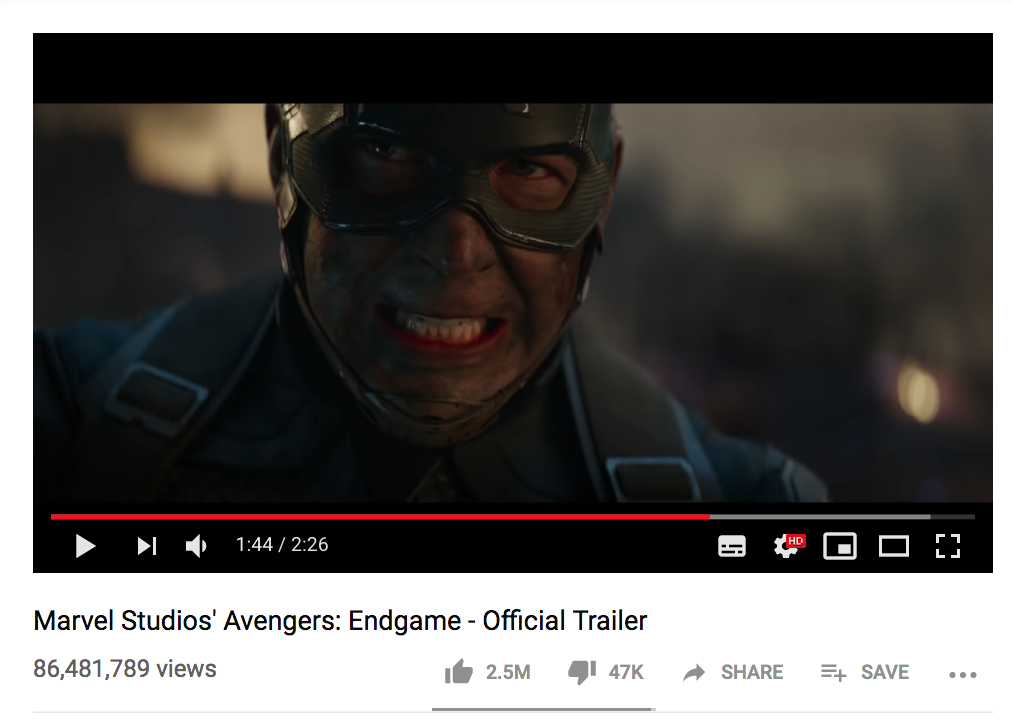 Focusing on story and character development in the trailers, instead of spoiling the action, only builds even more anticipation.

Going into a film and not knowing how it’s going to pan out, or what scenes are going to be shown, is very rare these days.

Showing very little story and action sequences also encourages audiences to speculate how the film is going to turn out. This leads to masses of people producing speculative content for sites like YouTube, indirectly marketing the film from a user generation point of view.

One YouTuber in particular, Deffinition, gives a breakdown of the first, second and third Endgame trailer, connecting the dots that others may have missed.

You can check his channel out here: https://www.youtube.com/user/definition1988/videos

The trailer’s have done a great job at evoking nostalgic feelings within audiences by scattering them with clips from previous films.

In the second trailer, we get shots from the first Iron Man through to the first Captain America, this takes people down memory lane and highlights where this journey started.

The throwbacks to previous films works perfectly for Endgame since it is the final chapter in the Marvel Cinematic Universe. Adding the older films to the trailers really builds background context to the events whilst also showing how far the individual characters have come.

As well as promoting the actual film, the Endgame trailer also effectively promotes the movie that has come before it: Captain Marvel.

Captain Marvel receives the spotlight in the second trailer through her interaction with Chris Hemsworth’s Thor.

As Captain Marvel is still showing in the cinemas, this is a clever move by Marvel as it gives people a reason to go and watch the movie so they are prepared for her appearance in Endgame.

They have catered their marketing materials specifically to individual channels, for example, using condensed snippets of their trailers on Instagram with a link to the full trailer on YouTube.

Many iterations of poster designs for the movie can be seen on Marvel’s Instagram, Twitter and Facebook too. The stylish poster designs work perfectly on social media to engage fans and visually showcase the actors/characters in the films. 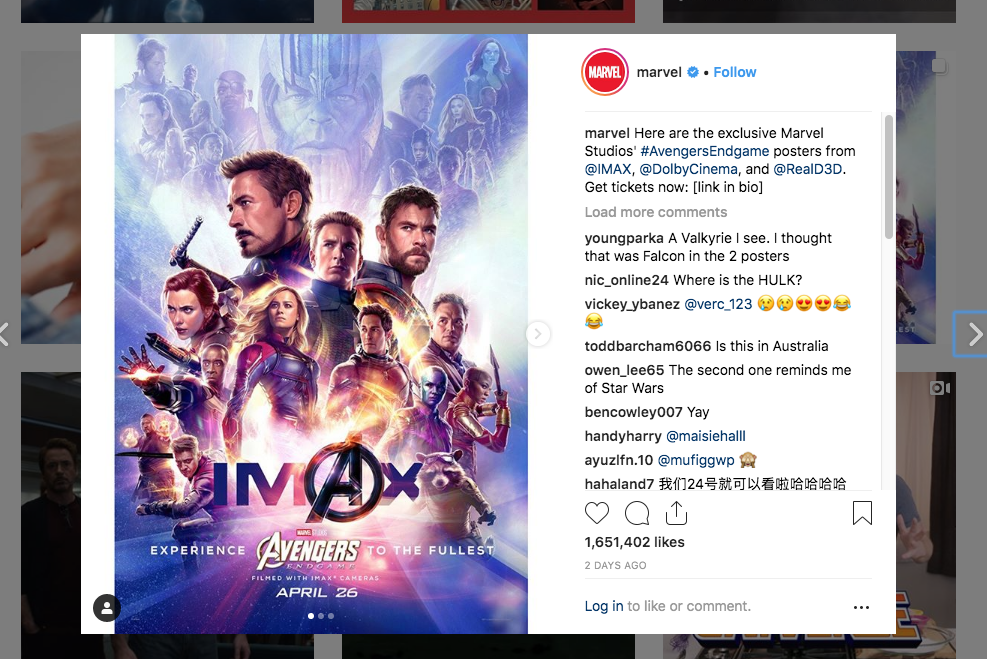 *Spoilers from Infinity War ahead*

*Are you sure you want to carry on?*

After the infamous “snap” from Thanos, we saw half the marvel universe dusted. That big purple b*stard.

To capitalise on the audiences bereavement, Marvel has produced a series of images for social media juxtaposing the characters who survived with the ones who were sadly snapped out of existence (The trauma is still very real).

A very simple idea but one that builds up anticipation as to whether the dusted characters will return or not and drives huge engagement. 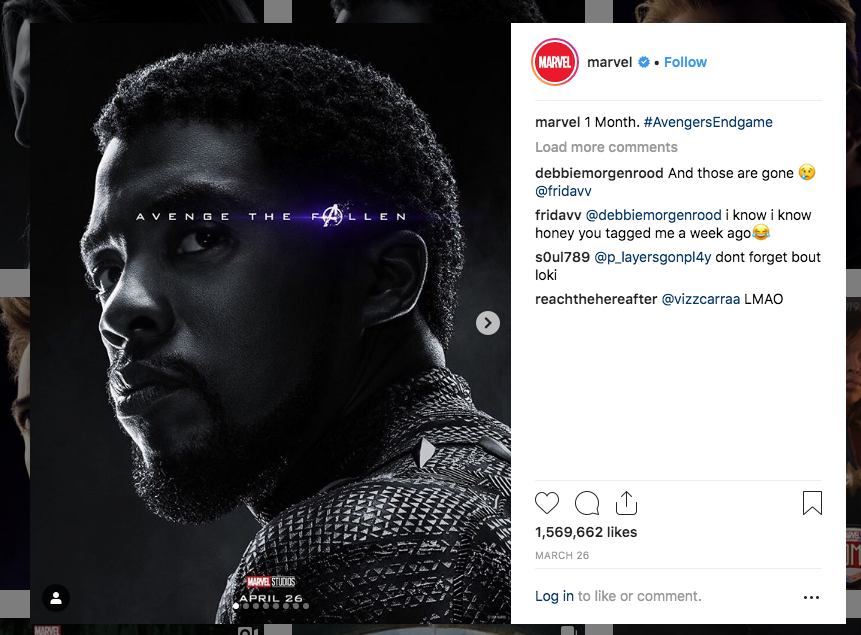 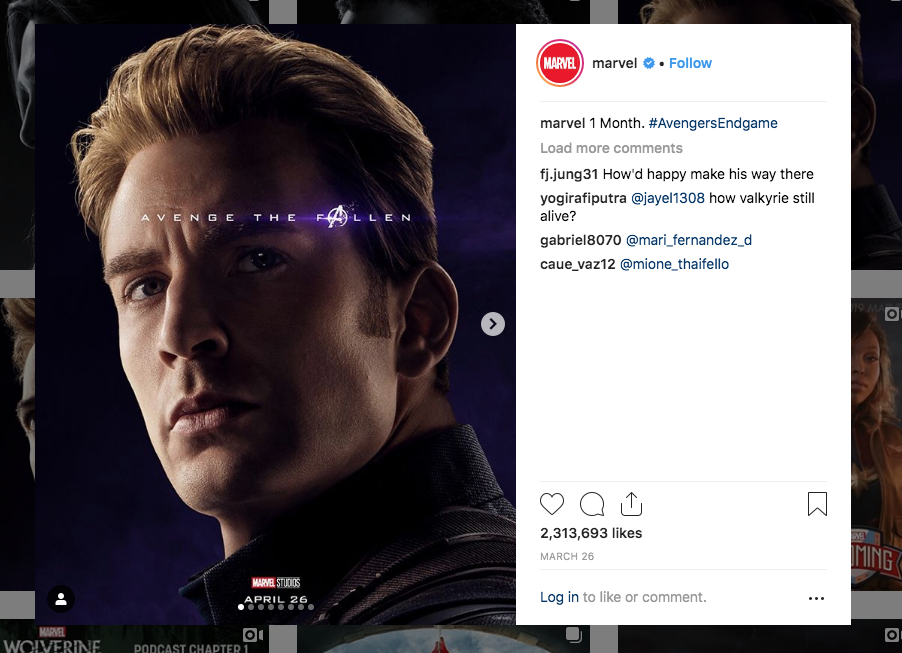 Not only have marvel done a fantastic job at filling our feeds with superhero goodness, the actors and directors from Endgame have also done a great job at promoting the film.

The Russo Brothers, who have directed Infinity War and Endgame, have populated their social media feeds with relevant marketing materials from the film, as well as behind the scenes images. 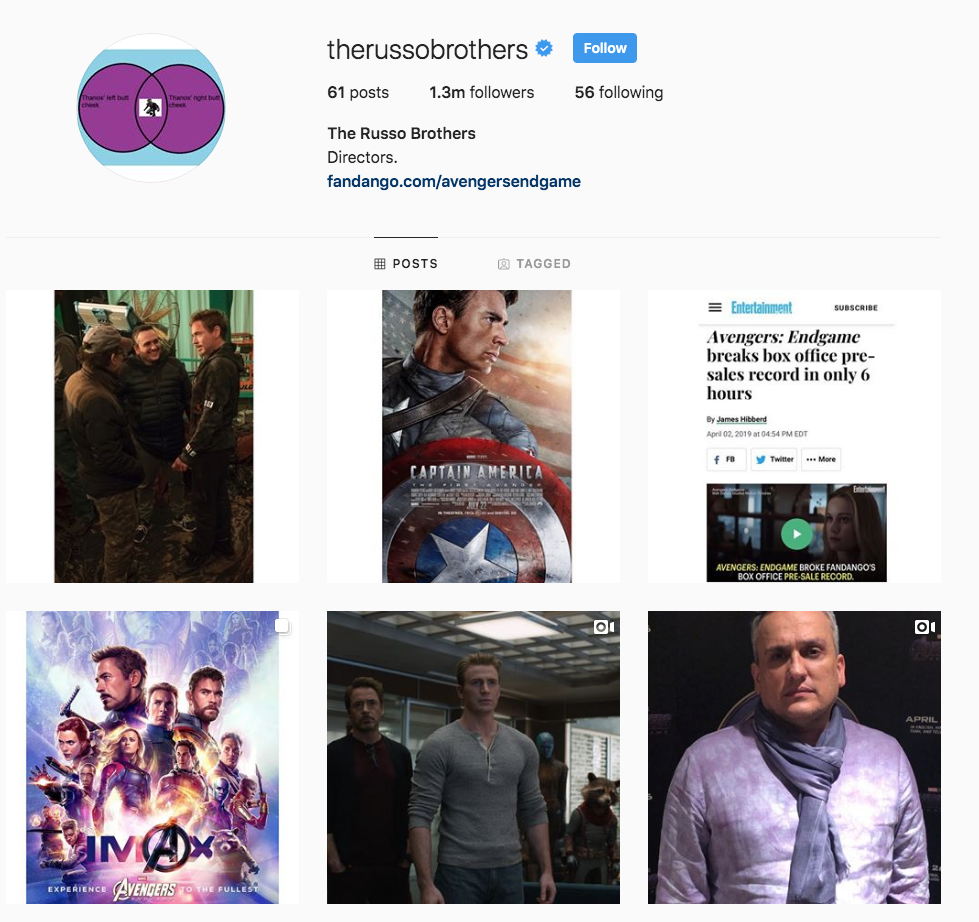 This leads us to our next point: The casts social media.

Endgame is filled with some huge stars. From Chris Hemsworth and Robert Downy Jr to Bradley Cooper and Scarlett Johansson. The 5 main stars of the Avengers have a collective audience of around 35 million on Twitter and 50 Million on Instagram.

This gives Marvel the ability to leverage their actor’s social media platforms to again build anticipation for the film and drive ticket sales.

A great example of the actors getting involved was tweeting the recurring line from the trailers: “Whatever it takes”. The constant repetition of this line sticks in peoples heads and really drives home the message that this is a film where the stakes are incredibly high. 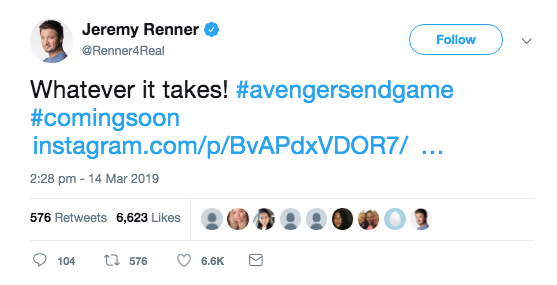 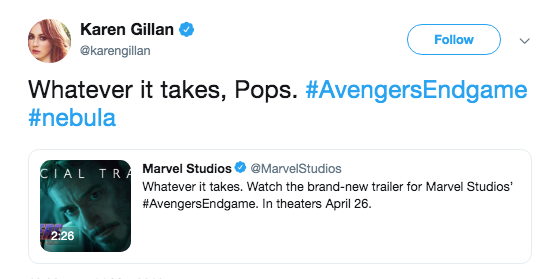 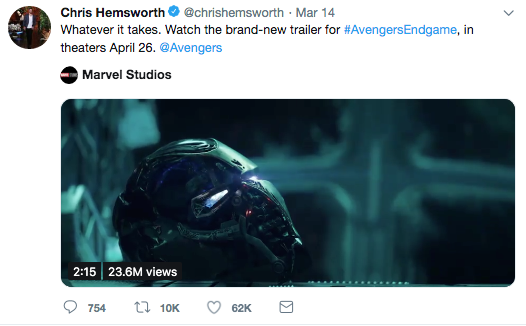 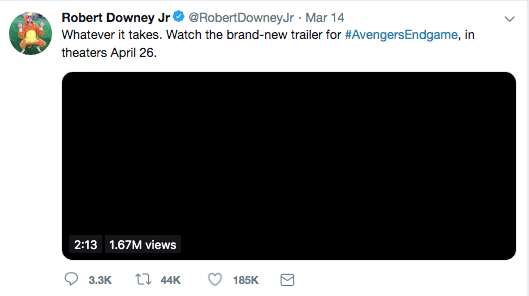 Marvel isn’t exactly shy of money. So, you can expect that their marketing budgets for each film are usually pretty high. For some background context, Guardians of the Galaxy Vol. 2 had a marketing budget of $80 million while Spider-Man: Homecoming came in at an impressive $140 million. Avengers: Infinity War increased on Homecomings budget by $10 million, with Marvel spending $150 million on End Games predecessor. With all that considered, how much do you think they spent on marketing their biggest film to date?

Over a whopping $200 million. Yes, you read that correctly. The Avengers End Game Marketing Budget is actually higher than the average Hollywood movie budget. Marvel partnered with some huge brands to promote the film such as Audi, McDonald’s, Coca-Cola, Google, General Mills and Ziploc. So with a staggering budget and the right partners, you’d expect a big return, right?

After months of anticipation, End Game finally released on April the 26th and raked in a huge $1.48 billion worldwide. Within only a week of releasing, End game has risen to the 8th highest grossing movie of all time. For a movie that contains a talking racoon, that is impressive.

Endgame has rocked the world by providing a satisfying conclusion to the epic adventure that Iron Man started us on.

The way Marvel has marketed the film has been refreshing, especially in a world that contains so many spoiler ridden trailers. Marvel has used mystery, curiosity and leveraged their own stars platform’s to generate a buzz.

End Game now sits at third position for the highest grossing Marvel movie, with Infinity War and the first Avengers edging above.

But with looking at how things are currently going, End Game will soon over-take both.