As you figure out how to measure your Facebook Ads’ performance, you might hear a lot of advice about click-through rates (CTR). This number measures the percentage of an ad’s viewers who clicked on the ad’s primary link.

Nifty, right? While you want plenty of eyes on your ad, you also want the people who see it to act on it — that’s where the money comes from.

But, if you look at Facebook’s help page for CTR, something’s missing. It tells you what a CTR is, but not what a good CTR is.

That’s where we come in. We’ll explain what to expect as a good CTR so you can start setting benchmarks that matter.

What is the Average CTR for a Facebook Ad?

Before we talk about what makes a good CTR for Facebook Ads, let’s find out what an average CTR looks like. After all, if you’re doing better than most advertisers, that’s a great start.

It’s promising to have a higher-than-average CTR for your industry, but just because a CTR is average doesn’t mean that it’s good. So, what makes a good CTR? Let’s see what the experts get from their ads to learn what a professional expects.

Databox asked more than 30 marketing professionals about their average CTR to understand what a good Facebook Ads CTR is. They found that industry experts tend to get at least 2-5% — over half of the respondents said they had a CTR between those percentages. 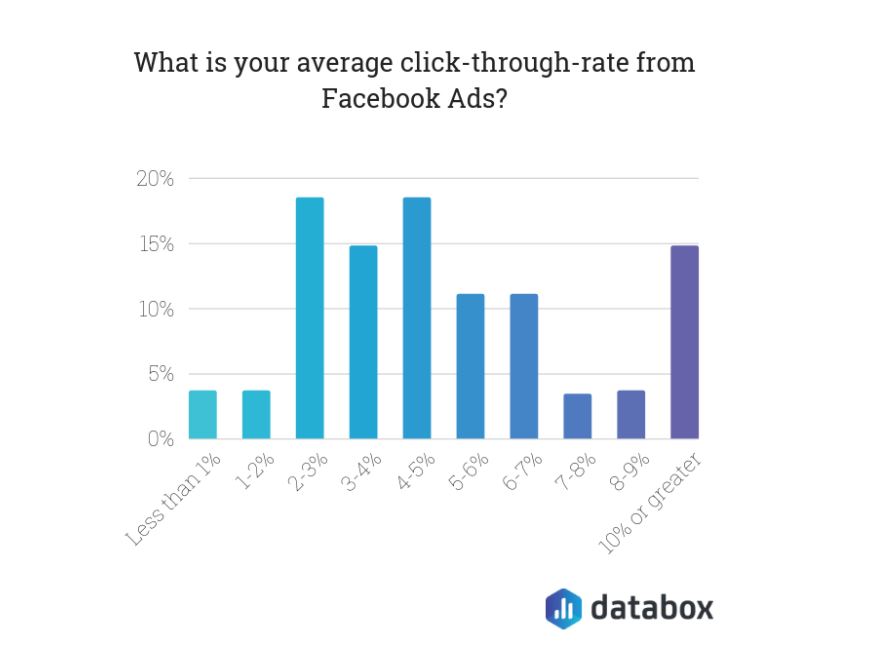 You can think of that CTR as a floor, not a ceiling. Almost 15% of the marketers had a CTR of 10% or greater. CTRs can go far beyond the average if you know what you’re doing.

If you have a CTR lower than 2%, look at these results as an opportunity. These professionals can earn high CTRs, so you can, too.

How Do I Get a Good Facebook Ads CTR?

What can you do to improve your CTR? Regardless of your CTR, you can aim for a higher number by looking at your ad’s:

Knowing the right direction to take these ad elements takes two actions — research and testing. Research your customers and market to guide your targeting and creative, then test different components against each other to learn what works best.